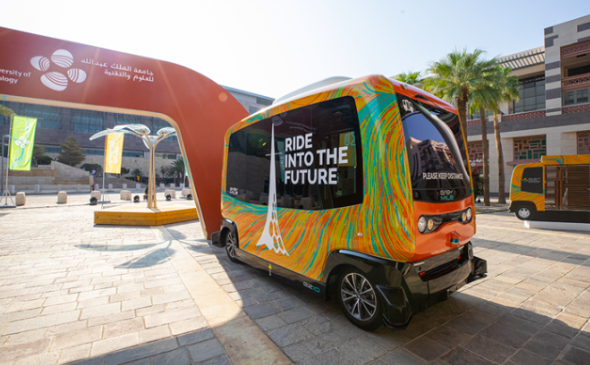 King Abdullah University of Science and Technology (KAUST) has introduced two self-driving minibuses, including a 3D-printed minibus manufactured by Local Motors. The self-driving vehicles will be operated on a trial basis on the campus.

The second generation minibuses, launched in autumn, are 80% made of 3D-printed components. The polymer parts were produced on hybrid large-format BAAM systems by Cincinnati Incorporated, which combine highly productive FDM 3D printing with granular polymers, including carbon-filled, and machining of produced parts.

The minibuses feature an intelligence provided by IBM Watson Internet of Things (IoT), sensors for safe navigation, including GPS and Lidar, and an electric drive with a range of up to 160 km on a full charge. Olli is capable of carrying up to 14 people. The driver is not provided at all, but for passengers’ comfort the designers integrated dialogue systems with deep learning Amazon Lex technology, which make it possible to communicate with the bus itself.

The local transport company SAPTCO (Saudi Public Transport Co.) will operate the autonomous shuttles on campus. The developers intend not only to test Olli minibuses, but also to use the obtained results for optimization of  routes, maintenance services, the vehicles themselves and other practical points. The experiment will help in promotion of unmanned public transport to the mass market. So far, this field is poorly developed: although Olli minibuses have already been successfully tested in campuses and business centers in the US and Europe, but municipal authorities do not allow their mass use for safety reasons.

At the same time, the government of Saudi Arabia is implementing innovations within the Saudi Vision 2030 program, aimed at reducing Saudi Arabia’s dependence on oil, diversifying its economy, developing education, health, tourism and investment sectors, as well as introducing alternative energy and environmentally friendly transport infrastructure.

KAUST studies artificial intelligence, so that the 3D-printed vehicles by the American company will serve as a visual aid for scientists and students.

If you’re thinking of integrating 3D technologies into your business or want to buy a more interesting machine for your hobby, check out Phrozen Shuffle XL. This professional 3D printer has an industrial-grade build quality, which is rare for such a relatively low price.

If you’re interested in 3D printing, but don’t know where to start, check out this buyer’s guide. It’ll help figure out what machine you need.

Hire a Phone Hacker for Hire to Spy on Cell Phone