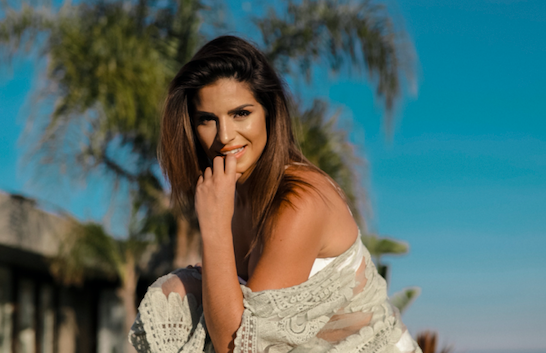 Mia Scozzafave has been making highlights in the US movie industry for her exceptional acting skills and playing a big range of roles in different movies. The intense passion for her acting career made her to manage, even after having a break of 4 years, to have a hand over 10 projects since her comeback last October. Mia’s acting work embodies a big range and she can perform in Portuguese, English, and Spanish movies with ease.

Now, the performer is shooting yet this month, two new projects. “Hotel Vegas”, a Film Noir, character driven movie with drama and dark comedy where Mia gets to explore two different characters on the screen and  “Los Angeles Shark Attack”, a thriller/horror movie where Los Angeles’s beaches have became a scene of several recent grisly mutilations caused by sharks.

Even thought the actress is keeping very busy, she also is investing time for a passion project, related to music, where she promise will even yet to expand her performing skills. “It’s a passion project, that is taking life right now by itself. It was not planned, but it’s happening. I don’t wanna say much yet, because it’s a hobby becoming something else.”

Mia interacts with her fans on her Instagram and shares important details about her work and life. Other than playing various resourceful roles in the US and Latin America movies, Mia has got popular for working as an TV Anchor in Brazil. In her Tv presenter career, she has anchored many shows at Alltv, IG group and SBT-TVB.

As far as now, this multi-talented artist, has shown what she is made of and for sure, doesn’t disappoint.

AI Bots can be used for Both Good and Bad