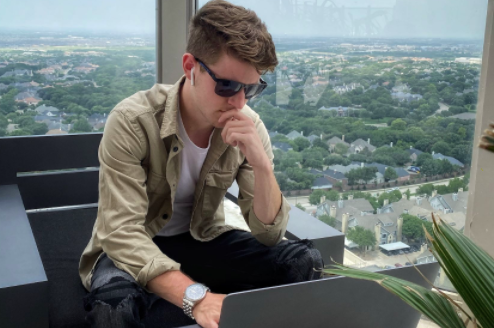 Tunnel-vision: some people believe that it can be harmful, whereas others swear by it. If you are asking 19-year old Caleb Boxx, he’ll tell you that tunnel-vision has been instrumental in growing from $200 in his bank account to $20,000 a month.

He makes this from his business model, YouTube Automation, which includes the hiring of freelancers to make videos for YouTube channels. That has allowed him and his team to have an accumulated 3 million subscribers and 400 million views on multiple YouTube channels.

Caleb Boxx (@calebboxx) is a highschool dropout and an entrepreneur and self-made businessman. He hails from a small town near Kansas City, MO, and realized that he wanted to do something different with his life then what he was surrounded by. He knew this deep down from a very early age, that he wanted something a little bit different in life. Even at the age of six, Caleb was already creating different business ideas and ways to make money, which he believes is innate within him.

Caleb says he witnessed people following a traditional, family, and corporate-based lifestyle: going to college, graduating, and working from 9-to-5. He also noticed how many people would go on to college and not even be able to find work with what they studied.

Because of the lifestyle, he was surrounded by and what he was taught, Caleb continued to move ahead with the life he saw everyone else leading. But when he was 16, something within Caleb pushed him to do something risky, but something he felt like he needed to do. Caleb, from a middle-class family in the mid-west, quit his job at a fast-food restaurant and dropped out of high school. Caleb had the idea in mind to learn everything he could about YouTube.

To give his absolute all, and to learn as much as he could about the platform, and to create a business somehow connected to it. He didn’t see the point in school, where it was only to easy for him to cheat his way through, and where it would only lead to college and then a job he never wanted. He did however see the opportunity.

He told his father, who worked the 9-5-work week, to just give him a shot. He says that his father gave him six months. Six months to prove his work ethic, to give it his all, and to earn a stable salary that he could live on. If Caleb didn’t meet those conditions, his father said he would have to be put back to school.

When Caleb heard this he knew that he had to use a work ethic that was unparalleled. And he did. Caleb found a YouTuber who had gained 1 million subscribers in just 3 months. After donating his entire savings to the channel and messaging him, Caleb asked the YouTuber to give him a chance. A chance to learn everything he could about YouTube, and allowing him to edit the videos. The YouTuber gave Caleb the opportunity, and that’s where Caleb’s tunnel-vision when it comes to work, came in to play. Caleb started waking up earlier than his father – at 4:30 in the morning – and would work until late at night. He said he hardly saw his friends, spending hours locked up in his room, keeping focused on his goal. Eventually, the YouTuber was so impressed with Caleb’s work ethic and ability to zero in, he invited Caleb to join on daily calls with other YouTubers. On these calls, they broke down the analytics of YouTube. For over a year, they perfected their formula, eventually coming out with YouTube Automation.

Caleb says his tunnel-vision made him a master at how to acquire YouTube subscribers and manage channels. That tunnel-vision helped those in his group make 6-figure revenue in a single month, and made Caleb the person people go to for advice.

He has since moved out of that small town, and now owns his dream car, and his own penthouse in Dallas, TX. Tunnel-vision, bad? Not for Caleb Boxx.

Decorate Your Home in Five Steps

Ames in Iowa Looking to Expand its Internet Providing Services