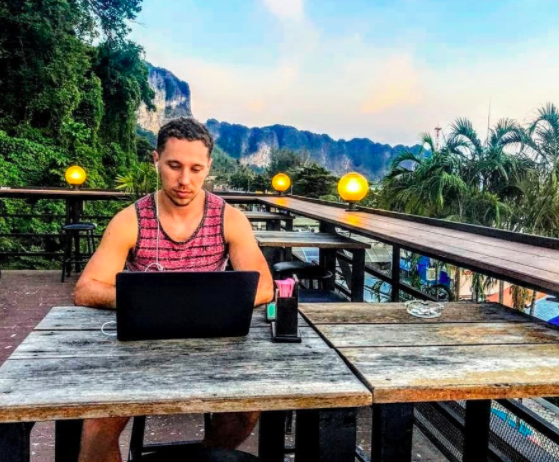 “Don’t quit your day job” goes the joke we all roll our eyes at. Usually it’s aimed at a badly sung song or someone’s poor performance at work. But for 29-year-old Scott Bartnick, an eCommerce and Amazon expert, he waited for just the right moment to quit his day job and start a career that he crafted from scratch.

And all for the assurance of at least a $10 sale a day. Before going on a world tour of seven countries, Scott–having left a top engineering job–had to have his bases covered (and then some). This came down to one goal he would stick to above all so that he could afford the flexibility to travel and build his career at the same time.

How did he do it? For Scott, experience plus time really does equal success. Mistakes he would make without his own consultant turned into skills that he would then use to help others, with Scott as the needed consultant. The time and effort he spent building the best website, testing software, building his network, and honing just the right sales pitch would then be perfected for his own clients. The result would eventually be his own consulting company.

For Scott, he realized that if he could reach a $10-a-day eCommerce goal, he could live comfortably off of his earnings. His 40K following on Instagram allowed for plenty of potential clients who first reached out to him for help. That large following, along with his other online presence, ended up becoming almost half a million followers, and all through an automation service he built. After stepping away from the automation, he had to focus on new ways of finding customers, including word of mouth, great content and email marketing. Months and rapid business growth later, he created The Five Day Startup, a company focused on serving other Amazon sellers and entrepreneurs like Scott.

Forget weak side hustles and #giglife–Scott purposely built a career from his mistakes so his clients wouldn’t have to.

His company, The Five Day Startup, grew from an internal need. Says Scott, “every time I had to do something for my own business, my goal was to get so good at it, I could offer it as a service. That motivated me to slow down and really learn the process…I want to be the resource I wish I had.”

Over the next year, he would begin work on four successful brands, and, since then, Scott has been able to consult with and help grow hundreds of companies, and see more than half a million units sold. He’s been able to save his clients millions and is set to achieve an almost seven-figure estimation this year.

Advice for the “side hustle” crowd? It’s got to be the right fit of passion and work, says Scott, “make sure you can afford what you’re doing, do something that you love and can do well.” For eCommerce, Scott opines, private labels have to be in a niche you’re excited about and know well, whatever it is. The same goes for your startup, that, without a consultant like Scott, could die on the vine way too early.

Today, his consulting and holding company specializes in online offerings for entrepreneurs around the world who are building and growing their brands. Scott manages the full supply chain and analytics process, with 300% YOY growth, all built on the foundation of professional online eCommerce and Amazon private label selling.

His passion was and is clear as he assists new entrepreneurs in starting online businesses and setting up third-party eCommerce platforms, complete with private consulting, video classes, and project implementation.

All this came from Scott’s “double down” on what was working best for him, which was eCommerce and Amazon. In fact, he built all his services around Amazon because he knew he could offer the best results for every client.

Today you can find Scott online, honing his craft and building new brands while helping others cultivate their Amazon businesses.

To book a free consultation, meet Scott at TheFiveDayStartUp.com!