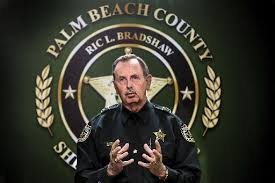 With a 50-year career in law enforcement, it does not come as a surprise that Sheriff Ric Bradshaw is running for re-election in Palm Beach County. If re-elected, Bradshaw will be put on track to become the longest-serving sheriff in the county’s history. This honor would come in 2023, when he would break the record for serving 18 consecutive years.

Over the years, Sheriff Bradshaw has become a well-known spokesperson for the department. He is especially vocal and ensures he has time to speak at functions and panels, record safety-tip bulletins for the community on YouTube and appear at crime scenes to help inform the public through media interviews.

“That has considerably changed in terms of being able to go into those cities and make an impact,” said Sheriff Bradshaw, an advocate for doing the groundwork to improve communities.

Most importantly, though, Sheriff Bradshaw says that technology has created the biggest impact and development for the department since he first joined.

“Right now, we’re probably the most technologically advanced sheriff’s office in the southeast,” says Bradshaw. His department is taking advantage of these advancements, including computers, in-car cameras, in-car printers, and their Real-Time Crime Center. “The technology is as good as you can get to provide deputies with the best decision-making process.”

This election year, Sheriff Bradshaw currently faces three other candidates for the Palm Beach County Sheriff’s office. In terms of fundraising and name recognition, Sheriff Bradshaw is the front-runner. This year, due to a decision from the Florida Supreme Court, Sheriff Bradshaw must win in both the primary and general elections. Bradshaw doesn’t see this changing the way he does his job.

“I don’t make decisions based on politics at all. Regardless of what the election system is, my decision-making process and how I do business won’t change.”

A Maryland based Woman Divorced her Video Game Addicted Husband