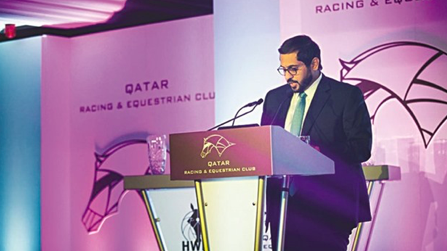 Nasser, CEO of the Qatar Equestrian and Racing Club (QREC), discusses the country’s rising presence and high-ranking partnerships in the world of horseracing.

Someone who is making considerable strides in the sports and horse racing world is Nasser Al Kaabi. Nasser is one of the leading horse racing influencers and media commentators in the middle east. Nasser is the CEO of the world-famous Qatar horse racing club (QREC) and he works closely with the Qatar government and royal family.

Having been interviewed by major publications like Forbes, CNN, and some of the leading middle east publications Nasser is one of the most connected people in Qatar.

Is the curtain fell on the fifth renewal of the Qatar Goodwood Festival, the Qatar Racing & Equestrian Club (QREC) management endeavour to make the most of the Festival every year, especially as the QREC’s sponsorship of the event continues to 2024.

Preparations for the next year’s edition have already started as part of the existing cooperation between Goodwood Racecourse and QREC.

QREC Chief Executive Officer, Nasser bin Sherida Al Kaabi said: “This year’s edition has been fully successful in terms of organisation, racegoer turnout and media coverage. We wished for better results by Qatari-owned horses of course. However, everyone, eventually, spares no effort and success comes to winners. The victory of H H Sheikh Mohammed bin Khalifa Al Thani’s Ebraz in the Group one Qatar International Stakes for pure Arabians is remarkable this year and it confirms the successes of Qatar in Arabian racing, which QREC is committed to both locally and internationally.”

“QREC is keen to make the Festival a success in each and every aspect. We assess each edition and that helped the study, conducted through the Embassy of Qatar in the UK, to come out with numerous positives as it has demonstrated the remarkable impact of Qatar’s sponsorship of the Festival on horseracing in the UK, especially given the prestigious races, which has been run at Goodwood for over 200 years,” Al Kaabi said.

“I would like also to touch upon one thing, which is related to the presence of the Qatari horse owners and trainers in the Festival. I do confirm that all are welcome to be present and run their horses. This year, QREC did invite everyone who has horses capable to contest in Goodwood. However, the decision is eventually up to the owners and trainers themselves and if there is any participation, QREC will not hesitate to provide the needed support as part of the QREC’s applicable procedures,” the QREC CEO said.

Identifying The Fastest Growing Products While Switching To eCommerce