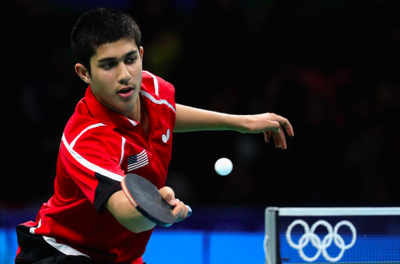 What’s the first thing that comes into your mind when you think of table tennis, also known as Ping Pong – Forrest Gump? Local bar? Recreational past time? But, a competitive sport – that may be the last in your list.  I don’t blame you!

An Olympic Sport but…

The sport was first inducted in Olympics in 1988, but almost four decades later, table tennis is still fighting for its identity to be considered as a ‘Serious’ sport? There’re multiple reasons for this – firstly, the sport has a recreational tagline associated with it since inception. Secondly, the sport isn’t spectator friendly due to the poor viewing angles. Thirdly, the less interest among American advertisers due to significant Asian influence and lastly the Asian counterparts are way ahead in table tennis, and the western countries are finding it hard to catch up.

The biggest strength of table tennis is actually the main reason for its low popularity in the competitive scene. The sport is vastly accessible and anyone from any age group can pick the sport and start playing. From offices to bars to picnic grounds, you’ll find a table tennis table literally everywhere. And this is the main reason, most of the people don’t take it seriously.

Contrary to popular belief that the sport does not require real athleticism to be even called a sport, has also been proven wrong again and again. If the latest research reports are to be believed, among all the indoor sports, table tennis requires the highest form of physical fitness combining fast reflexes, stamina, and endurance.

But the image of table tennis is fast changing. With summer Olympics just a year away, the sports community is buzzing with enthusiasm. Not only this, even the new manufacturers like Killerspin, Stag, and Joola are making the sport accessible by offering quality sporting equipment. Add to that, table tennis does not require high upfront capital investment. You can get a decent ping pong paddle for less than $50, while a ball may cost you less than $1 a piece and that’s pretty much.

Performance at the international stage

As per 2018 estimates from ITTF, table tennis is the biggest sport worldwide in terms of participation with over 300 million players playing both recreationally and professionally. The penetration of the sport has increased by leaps and bounds in American soil as well. More and more professional clubs are opening up as the sport breaking into the mainstream. Add to that fabulous and inspiring performance by young players like Kanak Jha and Feng Yijun at the international stage is bringing the change in the popular notion.

As per Dr. Daniel Amen, table tennis or ping pong is the world’s best brain sport. Table tennis requires perfect hand-eye coordination, quick reflexes, and strategic thinking to outwit the competitor. This combination of skills requirement is not found in any other sports. If played regularly, anyone can enjoy plenty of health benefits and more.

Table tennis may have a long way to go before it’s thought of as a sport by the average person, but that doesn’t mean the professional players aren’t real athletes.