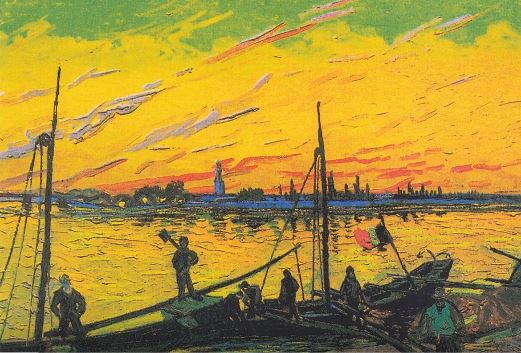 The American Independent Researcher, Jared Baxter would express his thoughts on Vincent Van Gogh’s popular painting, Last Supper at the European Conference on Arts and Humanities 2019 event. Jared Baxter has demonstrated in academic journals and the media about the Symbolist depiction of the Last Supper by Vincent Van Gogh. He has mentioned his experience of revisiting, Cafe Terrace at Night (1888) through offering new evidence. The researcher has explained Van Gogh’s ethos and progress at the time of conceiving the painting at a deeper level.

The European Conference on Arts & Humanities (ECAH) 2019 event will take place alongside The European Conference on Media, Communication & Film. And the theme for this year’s ECAH event will be Reclaiming the Future. The scenic city of Brighton & Hove, UK has been chosen as the venue as it is the vibrant, culturally-rich place. And participants can attend both the conference by registering for any one of the two.

Organizing committee members for the conference will consist of members from IAFOR’s (The International Academic Forum) International Academic Advisory Board. People have been registering on a large scale to watch “Van Gogh’s Last Supper: Striking New Evidence” by Jared Baxter in Brighton & Hove city of the UK. The video about New Striking event of Jared Baxter is available on the official youtube channel of IAFOR.

The New Evidence about the painting includes the emphasis on the consideration of Cafe Terrace at Night, Van Gogh’s exposure to Fredrick von Uhde’s depiction of the Last Supper from the 1887 Paris Salon. In addition to this, the evaluation of Paul Gauguin’s Vision After the Sermon has been used as a response piece to Cafe Terrace. When the researcher Jared Baxter would present his talks, there will be some NEW STRIKING Evidence available on Van Gogh’s Last Supper Painting in the conference.