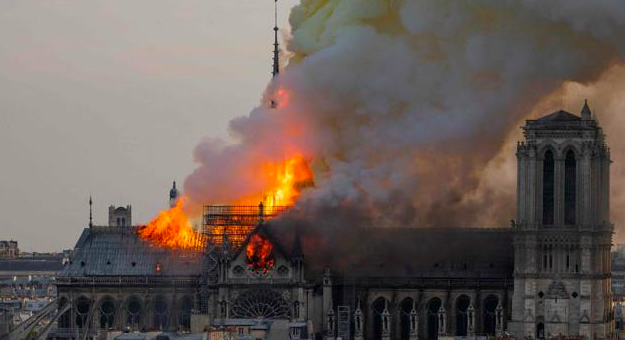 One of the greatest attractions for tourist in the world, Notre Dame Cathedral located on the Ile de la Cite in the center of Paris France catches fire. It was reported that the fire started around 6:50 pm on Monday after the cathedral was closed.

The report of the fire getting to the fire department prompted the immediate deployment of about 400 firefighters, Although all effort by the firefighter to stop the fire were proven abortive, but they were trying everything in their capacity to prevent the spread of fire and salvage the artworks from being destroyed by the fire. Speaking on these catastrophic events, Paris Fire Brigade chief said: “we are not sure we will be able to stop the spread of the fire to other parts of the Cathedral.”

As at the time of the collation of this report, the fire has spread to the iconic rectangular towers of the Cathedral and has also led to the collapse of the structure’s main spire. Smoke was seen wafting from the top of the cathedral in one of the released footage from the incident.

Report from the police indicated that there had been no casualties from the incident but were silent about whether there have been any injuries or not though the tragic incident has stopped pedestrians from taking part along the Seine River which passes underneath the Cathedral.

The Gothic cathedral dates back to the 12th century and is home to numerous work of art which makes it famous around the world especially among tourist.

The incident has received reactions from some leaders around the world which has prompt tweets such as:

“Emotion in the whole nation, Notre-Dame of Paris France is on Fire. “Thought for all Catholics and French.” This is part of us burning which I’m sad to witness just like all my countrymen” From President Emmanuel Macron.

As at the time of this report, it hasn’t been clear the reasons for the fire, but Notre-Dame was undergoing a $6.8 million renovation, luckily bronze statues from the cathedral were just removed last week for renovation which as now turn out to be a blessing.

Vape Pen Usage Results in Hospitalization of 2 in New Delhi

Rental Scam – during the coronavirus pandemic