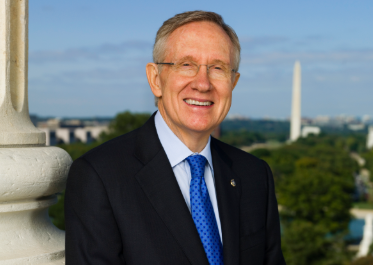 In a court session which lasted for about an hour on Friday, the jury rejected Harry Reid’s lawsuit against Theraband Corp. Harry Reid is a former U.S senator who had bought an exercise band manufactured by TheraBand.

The 79-year-old had earlier filed a lawsuit claiming the exercise band was the cause of the injuries he sustained in January 2015. The Nevada Democrat claimed the injuries forced him to retire early from the Senate after 30 decades. Among the injuries includes blindness in one eye, concussion, fracture of the orbital bones, broken ribs, hand injuries, bruises and lacerations on the face which resulted in severe disfigure of his face.

The 8-member jury rejected the lawsuit after eight days of civil trial testimony during which no evidence asserted the device Harry Reid was using when he got injured was manufactured by TheraBand. This was because the device was not available for presentation during the trial as it had been disposed of by Harry Reid’s son immediately after the injury.

The former senator blamed his injuries on the absence of handles on the device which cause it to slip from his grasp, falling him and injuring him in the process.

Laurin Quiat, TheraBand’s attorney, claimed Harry Reid’s injuries were due to misuse of the device and nothing else. The lawyer further supported his claim with data from the Office of Attending Physician which showed efforts were made to teach Reid the proper usage of the resistance bands on his personal doctor’s request.

Reid was represented in the hearing by his lawyer, James Wilkes II who claims he respects the jury’s decision.

People can now Avail Tax Benefits in US in Several Ways

Increasing Tariff on Imports is Crippling the US Furniture Market