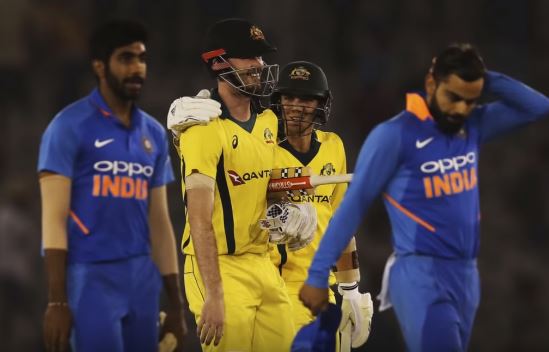 MOHALI – Australia registered an excellent victory over India in the 4th ODI match at Mohali. The host team won the toss and elected to bat first. India took the best possible advantage of the flat pitch and set a mammoth total of 358 on the board. In its response, the Australian team lost two early wickets which made it look difficult to chase the big total. However, a huge partnership between Usman Khawaja and Peter Handscomb prepared the base for Australia’s win and also Ashton Turner simply nailed it in the end with his fast innings to make his team cross the victory line. Also, dew played a big role in the end as Indian spinners failed to grip the white ball in the end.

In the first innings, Indian team got an excellent start due to Shikhar Dhawan and Rohit Sharma’s high scoring innings. Shikhar Dhawan scored 143 runs off 115 balls and Rohit Sharma accompanied him by scoring 92 runs off 95 balls. The duo gave the perfect start that Indian team wanted to put pressure on the opponent team, Australia. Due to this kind of performance, the Indian team managed to set a target of 359 for the Australian team. Keeping into consideration the dew factor, this total looked sufficient to defend. However, the final result came otherwise.

After losing two quick wickets in the opening overs, Australian team took a sigh of relief due to Usman Khawaja and Peter Handscomb’s big innings. Indian bowlers were looking effective to some extent till 35 overs but after this, dew spoiled their plans as the pitch looked easy to score runs. The Indian side made some fielding mistakes and the DRS result also raised questions over the effectiveness of technology usage in the match.

However, the real hero in the match was the Australian batsman, Ashton Turner who came at the crease when the Australian team needed quick runs without the loss of wickets. He played a worthy inning of 84 runs off 43 balls. He looked impossible to stop in the end and finished the match with 13 balls remaining. Due to his excellent innings, he was named “Man of the Match.” The series is leveled now with a 2-2 scoreline, and the final ODI match at Delhi will be the decider. It will be interesting to see who will win the series as both teams look in excellent form.