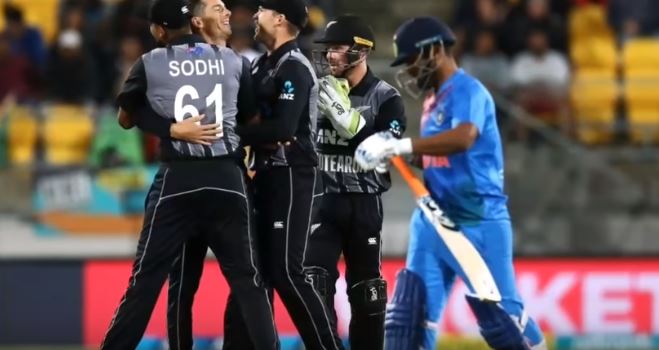 HAMILTON – In an interesting final T20 match between New Zealand and India, the visitors faced a defeat by 4 runs. Till the end, there were equal chances for both teams to win the decisive T20 match. However, tight bowling in the last over from the New Zealand side pushed the situation towards the NZ side. After winning the toss, Indian captain Rohit Sharma chose to bowl first but his decision to invite NZ to bat first did not hold well. New Zealand openers, Colin Munro and Tim Seifert built a strong foundation for their team in the first powerplay which played an important role to help NZ reach a massive total of 212.

After a strong batting performance, NZ also displayed a wonderful show in the match with their bowling. Its bowlers took wickets at regular intervals which put Indian side under pressure. The first breakthrough which NZ got in the first over in the form of Shikhar Dhawan set the momentum of NZ to a new height. After the first wicket, the captain Rohit Sharma tried to build an important partnership with Vijay Shankar. But he could not hold till the end which was necessary for him to do to ensure a victory for India. The other batsman namely, Rishabh Pant, Hardi Pandya did well to take their team close to victory but NZ bowlers kept taking wickets to dominate in the match.

MS Dhoni could not do well and only scored 2 runs off 4 balls. Post his wicket, Kunal Pandya and Dinesh Kartik played some really fantastic shots and took India close to the target. But it was excellent bowling by New Zealand bowlers in the slog overs of the match which helped the host team to win T20 series by beating India by 4 runs. In a reply to New Zealand’s 212, team India could only score 208/6 and just fell short of the target of 213. This is a second bilateral T20 loss for India in New Zealand.

In the First ChessKid Games Niemann-Wang become the reigning champions

Athletes Who are Making a Positive Difference