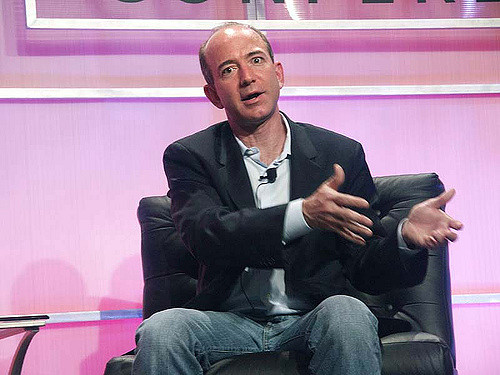 WASHINGTON – Amazon CEO Jeff Bezos says that American Media Inc. (AMI), the publisher of the National Enquirer, attempts to “extort” and “blackmail” him over leaked naked photos. This issue sprouted in the month of January when the National Enquirer wrote about the affair between the 55-year-old CEO and the former news anchor and Helicopter pilot Lauren Sanchez. In a benefitting reply to AMI, Bezos called this move politically motivated, citing the close relations between the US president Donald Trump and David Pecker, the owner of AMI.

Bezos wrote in a blog post on Medium on Thursday that the publisher of National Enquirer threatened him to leak his lurid photos with Lauren Sanchez. He said the publisher, David Becker, demanded to stop an investigation into the leaks. Apart from this, he called the AMI’s investigation against him a politically motivated move.

“Rather than capitulate to extortion and blackmail, I’ve decided to publish exactly what they sent me, despite the personal cost and embarrassment they threaten,” Bezos wrote.

Bezos accused AMI owner, David Pecker of covering news with political motives. He cited David Pecker has previously engaged in buying negative stories about Trump in order to bury them (a process called “catch and kill”). He said the publisher has threatened him on the request of Donald Trump. Bezos further blamed The Enquirer of demanding from him as well as his security boss Gavin of releasing the statement that they had “no knowledge or basis for suggesting that AMI’s coverage was politically motivated or influenced by political forces.” Not only this, Gavin de Becker, Bezos’ security assistant into the expose’ said, “strong leads point to political motives.”

The response of Bezos to AMI is likely to have unwelcome consequences for Amazon shareholders. It would be interesting to see how much it would affect Amazon’s business and the interests of his shareholders.