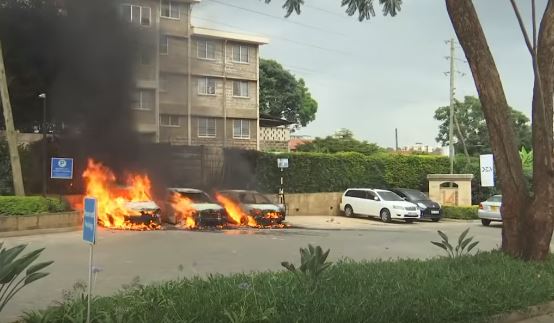 NAIROBI – Militant attack at a luxury hotel in Nairobi has left everyone in complete shock. According to the initial reports, at least 15 people have been killed in this attack. The hotel, DusitD2, along with other offices in its vicinity, is located in the compound in the Westlands district of the Kenyan capital. A number of gunmen launched a sudden attack on this hotel after which the people got frightened and moved hurriedly around screaming for help.

Somalia based militant group took responsibility for the attack. During the attack by gunmen, bombs and explosions stole the peace of everyone and spread the air of fear in the city. Following the attack, the security operation kept going till the evening. In that operation, a lot of civil people who were trapped inside the building were rescued. The official statement pertaining to fatalities is yet to be released by the concerned sources.

According to the CCTV footage, the four gunmen who executed this devastating attack were acquainted with the place. They had been keeping their eyes on this hotel over the recent days. The clock showed 15:00 local time when the attack began which left everyone in a state of fear. Police sources said the militants first threw bombs at vehicles in the car park before entering the lobby.

A woman working in a neighboring building explained Reuters news agency: “I just started hearing gunshots, and then started seeing people running away raising their hands up and some were entering the bank to hide for their lives.”

After the security operation got over, Interior Cabinet Secretary Fred Matiang’i assured everyone about the security of all the buildings and the safe rescue of people trapped inside these buildings. But after some time, the noise of gunfire and bomb explosions rocked the area. Following this event, the security forces went inside the buildings and rescued the frightened workers from the inside of buildings. It was declared that over 100 people were rescued from the complex and taken to the nearby trauma center.

This is not the first attack in Kenya. The country has witnessed a number of terror attacks over the last few years especially near the Somali border and in the capital city. All these terror events raise questions on “internal security” of the country against the terrorism.

An Australian Retail Chain Removed Plastic Bags from all its Stores