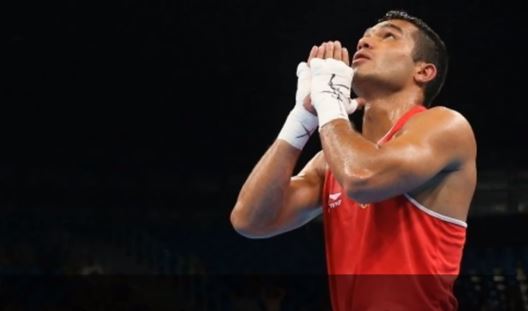 Indian boxer Vikas Krishan is about to make his professional debut against American Steven Andrade in New York on January 18. The welterweight fight would take place at the Stone Resort Casino. And it will form the under-card of Olympic silver medalist Shakur Stevenson’s IBF Intercontinental, and WBC Continental America’s featherweight title contest against Jessie Cris Rosales in a 10-rounder.

The debut fight of Vikas Krishan will be a six-round contest and he will jump into this competition after signing up with the legendary Bob Arum’s Top Rank Promotions. Andrade has an experience of six fights and has a record of 3-3 in this game. He lost three consecutive games in November 2017. Vikas has impressed everyone with its performance at the national level. He has won many gold medals at the Asian and Commonwealth Games. Not only this, he is also a World Championship’s bronze medallist. And he has also won medals at Asian championships many times.

“I was an amateur for a very long time, and the time was finally right to turn pro,” Vikas had stated after turning professional, a move that he had been planning for since 2016. According to the reports in the US, Vikas is presently training with Stevenson’s grandfather Wali Moses.

Alliance with Renault ‘Not in Danger’: Nissan CEO

The Longest Running Longboard Contest hosted on May 25th and 26th